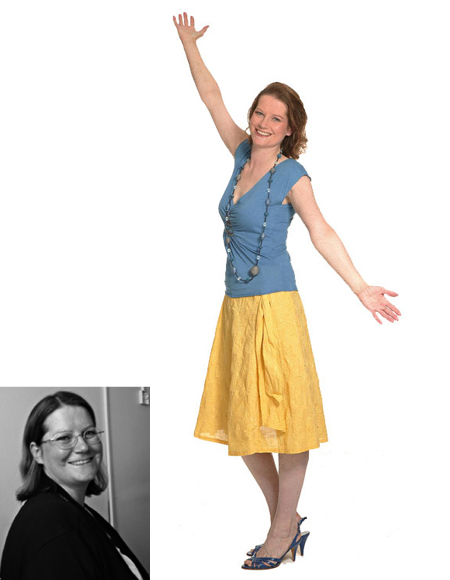 Linda Penney 39, lives in Hampshire and works as a Business Analysis Manager. She is divorced and has two children - a daughter aged 5 and son aged 2. She lost 3st 9lbs51lbs23.1kg in 8 months by keeping a food diary on Nutracheck. Here's her story...

I was like a beanpole as a child, but after university my weight just crept up without me noticing. Because I'm tall (5'9) it wasn't apparent but you could see in my face. In 2001 I fell pregnant with my daughter and was made redundant a week later. That was quite a year! I was very ill when I was pregnant - I had a serious chest infection, appendicitis, and an unusual form of cancer in my appendix. I couldn't have the radioactive scans to monitor the cancer until after I'd finished breastfeeding. I'm now waiting for my next scan to confirm that I've got the all clear. It was a very stressful time and the birth itself was difficult - I had to have an emergency C-section. I comfort ate to compensate for all my worries about my health and to make me feel better.

I got married in 2003 and I tried to lose some weight for the wedding. I thought I'd been successful but looking at the photos now I can see that I wasn't really! When I fell pregnant again with my son, my weight rose to about 15 1/2 stone - admittedly I was pregnant but I was nearly 100 kilos. I can remember looking at the scales and thinking, "I don't want to get up to three figures!" When I went back to work I was about 13 stone, but the weight crept back on again.

Nothing ventured, nothing gained

My moment of truth came in March 2006. I went to a local play area with my kids, and just couldn't get through the small holes at the entrance to the play-zone. I felt horribly claustrophobic. All I wanted to do after that was to sit down, read my Harry Potter book, and eat a plate of curly fries. And I suddenly thought, "This is wrong. I should want to be playing and running around with my kids".

The next day a woman in work was talking about her internet food diary. I thought it sounded interesting and I did a Google search for food diaries which came up with Nutracheck. Counting real calories means something to me so I thought "Nothing ventured, nothing gained, and signed up for the free trial".

I typed in what I had for lunch, and I couldn't believe it! I often had spag bol with garlic bread, and apple pie as a pudding. That made my lunchtime total around 1200 calories. In order to lose weight my total daily calorie target was 1400, so after having breakfast I realised I'd exceeded my daily limit before I'd even finished my lunch! That was my second moment of truth.

I started losing weight straightaway with Nutracheck and I thought, "Gosh this is actually working! That's what made me stick with it. I never, ever thought I was dieting. Nutracheck is a method of re-educating yourself - it's not limiting. You can transfer your knowledge of different foods in a way you couldn't do if you were counting points. The key is to think about portion size and cut down slowly.

Don't use the word diet. Say instead that you're re-conditioning your body.

If I want a bar of chocolate I wil9l eat it. Why eat oatcakes, a banana, nuts and seeds, to satisfy a craving that is for something else? You end up eating more calories in the end. If your body really wants chocolate you have to give into it - especially at that time of the month! But then I'll compensate with other meals.

I hardly drink alcohol at all. It's all part of my re-education understanding what the body needs rather than what it wants.

My body has been retrained to say that it can't eat a lot of food anymore. When I go out with friends I have to be careful that they understand that I really do only want a little portion. When eating out I now crave a big plate of vegetables instead of warm and cosy carb food like pie and chips.

By eating early with the children in the evening I don't pick while I'm waiting to get them to bed and cook my meal. I eat from a child's plate which makes a big difference; if I put my portion on an adult's plate it looks tiny and gets cold!

The only area where I've really had to use will power is with other people giving me things. My mum for example, often brings me a cup of coffee and a biscuit or teacake. Sometimes I would put the biscuit in my mouth and then think, "Hang on, that's 100 calories, and I'd take it out again".

The best thing about losing weight has been being able to go back to that play zone and go through all those tunnels without feeling claustrophobic.

Also, I had a Christmas party in December, so went to London shopping and found a dress that's a size 12. I could actually see the difference in me and felt a bit like Julia Roberts in Pretty Woman - I wanted to skip home shouting, "I've found a dress! I've found a dress!" That night the compliments were in abundance! "You look gorgeous tonight, however did you do it?"

I went through a divorce at the same time I lost weight which made me want to comfort eat. Losing weight at the same time was more of a challenge because of that. But getting divorced is one of those things and you just have to move on. The best thing I can do for my children is be as healthy as I possibly can.

My top tip is to remember that the computer only lies if you lie to it. By putting honestly what you're eating you realise what is healthy and what isn't. It's not about will power, it's about being honest.

Don't use the word diet. Say instead that you're re-conditioning your body. In the future I'm really looking forward to being able to shop anywhere and have more choice of clothes. Also I'm not going to be afraid of being photographed anymore, especially with the children.

I'm more shocked than proud at losing so much weight, especially as I never felt that I was on a diet. Even now, it feels peculiar, saying I'm a size 12! I am not one to shout about my success, but if my story inspires you to have a go, then it is worth any embarrassment it causes me!

Try us FREE for 7 days

* Weight loss is individual and your personal rate of loss may vary from any case studies shown on this website.

Nutracheck is a top-rated food diary App and website. We track calories and 7 key nutrients - carbs, sugar, fibre, protein, fat, saturated fat and sodium. Our mission is to give our members insight into what they are eating to empower them to make more informed food choices. We've been helping people achieve their weight management goals since 2005.

WINNER   UK IT Industry Awards 2018 - Mobile App of the Year

Our website uses cookies which are essential for this site to work. A cookie is a small file of letters and numbers that we put on your computer with your knowledge and consent.

Some parts of our website use 3rd party cookies that are placed on your computer by our advertising partners. These are used to help place ads that are more relevent to you.

When you register on this service and accept our terms and conditions, you are consenting for cookies to be put on your computer for the purposes described above so you can use the website.